Since the beginning of the year the stock market has continued to advance, giving the impression the 10-year stock bull market is unstoppable.

Since January the S&P 500 has increased by double digits, topping 3,000 for the first time on July 10. The losses from the sell-off in October have been recouped, no imminent recession appears on the horizon and fundamental economic measures are stable.

Finally, the Federal Reserve has maintained its policy of no interest rate increases for the foreseeable future and may even cut rates.

What could go wrong? There are several factors that will have an impact on the stock market’s likely direction over the next year.

Any intelligent assessment of whether the bull market has run its course must begin with an historical analysis of how much the market has currently appreciated since the financial crisis of 2008.

As the chart below indicates, the market reached its bottom shortly after the 2008 crisis and then began its long unbroken march skyward. The trajectory of the S&P 500 was indicative of other standard indexes such as the Dow Jones Industrial Average and the NASDAQ.

One of the most substantial factors in the unfettered rise of the market was the Federal Reserve’s policy of quantitative easing, or easy money.

For the past decade, an historically unprecedented zero-interest rate environment heavily skewed asset pricing in favor of stocks. A review of the chart below tells the tale: Interest rates have barely budged since 2008.

Compare the yield on the benchmark 10-year Treasury note in 1990 with the yield in 2014. the gap is profound.

The yield on alternative fixed-income investment vehicles has barely pierced 1% during for the past decade. As a result, investors shunned bonds and remained heavily invested in equities.

This mismatch in asset pricing was one of the factors that has sustained the market’s momentum. Given the duration of the period of easy money, investors have become acclimated to the low interest rate environment and many expect that policy to continue unabated.

In light of this sentiment, however misplaced, it is easy to understand why the market is peculiarly sensitive to the Fed’s projection of future rate increases. 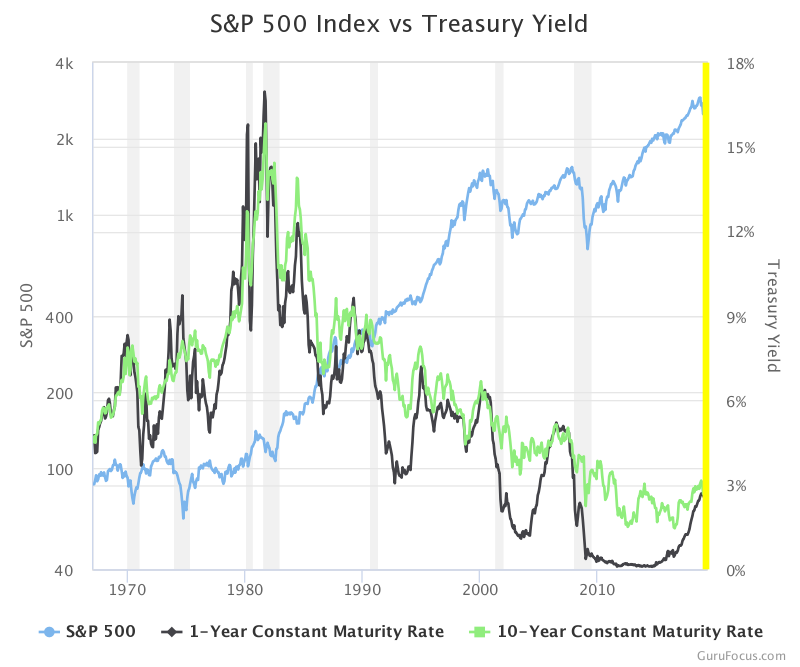 One measure of whether the market is overvalued by historical standards, is the earnings multiple.

Valuations for some of the tech stocks that helped propel the market to new highs are rather rich as well. Many analysts believe some of these companies will be unable to sustain their current growth rates.

Compared to the market it is hard to predict that the bull market will never run out of steam.

Given that the stock market’s meteoric rise and the Fed’s policy of easy money were coeval events, investors have paid particular attention to the pronouncements of the Federal Reserve concerning the likely direction of interest rates.

Indeed, investors have reacted precipitously when their expectations are confounded as evidenced by the market turbulence last October.

Many investors still have not yet acclimated themselves to the new investment climate of higher interest rates. The Federal Reserve started increasing the federal funds rate two years ago in steady 25 basis point increments.

Powell’s comment sent the stock market into a tailspin, sending the S&P 500 and the Dow Jones Industrial Average plummeting. Investors, spoiled from the low interest rate bull market era, did not expect any further rate increases.

Early in 2018 Powell made it known that he believed the Fed was not in the business of sustaining a bull market. After the market plunged in October, the Fed had a sudden change of heart and completely reversed its prior policy of planned additional rate increases for 2019.

The changed posture of the Fed from an almost stalwart position of two interest rate increases in 2019 as a fait accompli to a more accommodating stance of not wanting to cause another market selloff has fostered a rather odd situation of stasis between the market and the Fed.

Perhaps the single most important factor that could determine the likely direction of the stock market will depend on the answer to the ultimate question, who is in charge? The Federal Reserve or the stock market?

As indicated by the continuous rise in the market since January, investors feel confident that there will be no further rate increases in the immediate future. The changed attitude of the Fed has led many investors to favor riskier assets, confident the Fed has given such an investment strategy its blessing.

Indeed, the new thinking on rates, still low by historical standard, continues to favor riskier assets — a situation that mirrors the asset pricing of the past decade.

The risk for investors is, should the Fed change course and raise rates there could be a tumultuous sell-off as investors overreact by dumping assets such as junk bonds and growth stocks.

Last month, the yield curve inverted, with rates on short-term Treasurys exceeding those on the 10-year Treasury note.

An inverted yield curve has been a reliable indicator of past recessions, having inverted before each of the last seven recessionary periods according to the National Bureau of Economic Research. However, yield curve inversion, by itself, for a short period, is not a reliable predictor of a recession.

Ever-rising profit margins have helped fuel the bull market over the past decade. However, there are several inexorable structural changes that are going to crimp earnings growth rates.

Before 2018 drew to a close, many analysts were already adjusting their first quarter and annual 2019 margin growth projections downwards.

After heady, double-digit record-setting profit increases in 2018, several factors are going to coalesce to break the favorable decade-long trend that has supported historically high margin levels.

Some of these factors are already working their way to the corporate bottom line crimping profits. During the past few years, the percentage increase in wages has reached its highest level in the past thirty years.

According to the U.S. Labor Department, average hourly wages in February were 3.4% higher than a year earlier, sparked by low and declining levels of unemployment.

The unprecedented growth in corporate profits over the past two years was possible only, because companies had a strong tailwind at their backs: lower tax rates, increasing market share, relatively stable labor costs and a decade-long period of low interest rates that induced corporations to assume record levels of debt.

Should profit growth start to slow or approach historical average rates, the market will react adversely taking the steam out of what has been the longest running bull market in history.

The interaction between the factors noted above will provide an insight into whether this market has continued upside or if the 10-year stock party is over.

Is Procter & Gamble Worth Its Premium Price?

Is Procter & Gamble Worth Its Premium Price?

Big Changes to Your Retirement Plans: The Good, Bad, and Ugly

Everyone Loves Electric Cars, Except Buyers